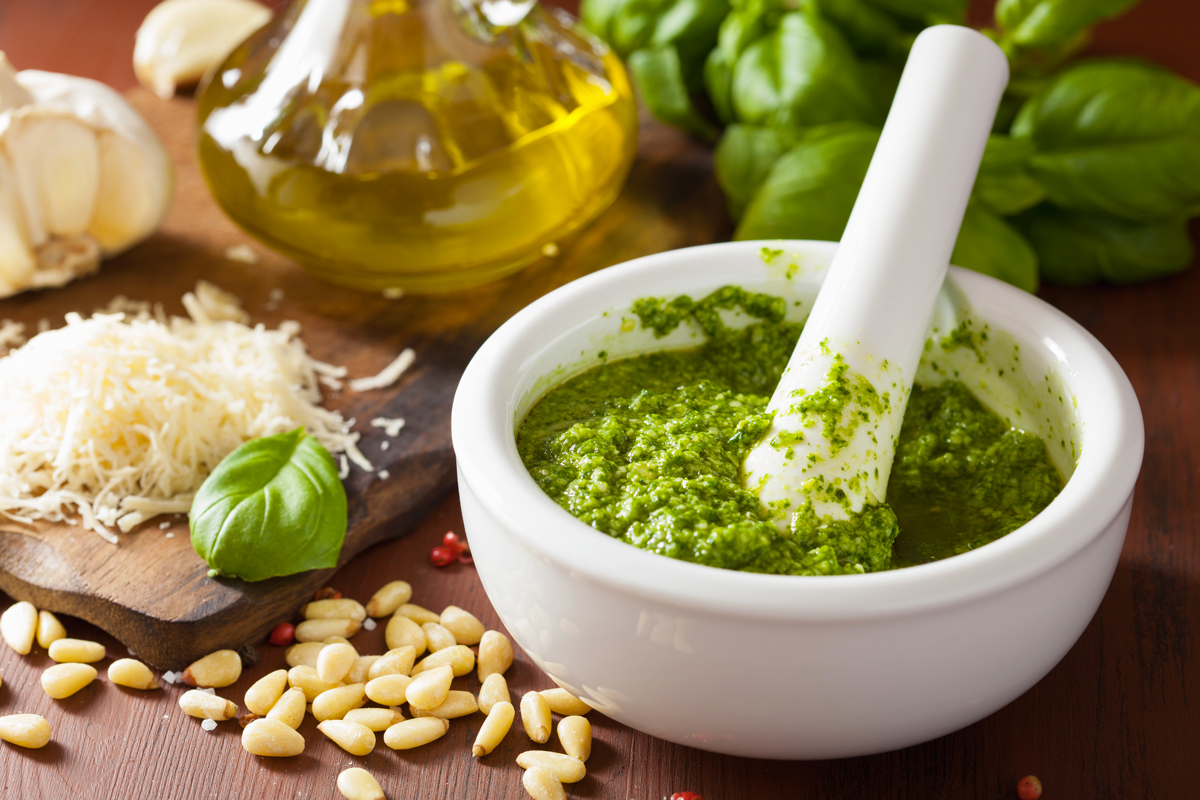 How did the pesto originate? Some curiosities

The pesto recipe dates back to the mid-19th century. Liguria is the cradle of aromatic herbs and their uses vary from the Middle Ages according to social categories: the rich share banquets with refined spices, while the poor flavoured soups.

This ancient tradition has given rise to pesto, a cold dressing obtained from basil, in the dialect Baxaicò and Baxeicò (from the Latin basilicum). This plant of Arab origin means royal herb..

Returning to pesto, the original recipe dates back to the second half of the 19th century; the first to mention it seems to be a well-known gastronomist of the time, Giovanni Battista Ratto in his work, The Genoese Cuciniera.

The recipe reads:
"Take a clove of garlic, basil (baxaicö) or in the absence of this marjoram and parsley, grated and mixed Dutch cheese and Parmesan and pignoli and pound everything in a mortar with a little butter until it is reduced to a paste. Dissolve it then with fine oil in abundance. With this batter, lasagna and gnocchi (troffie) are seasoned, adding a little warm water without salt to make it more liquid ".

Despite its relative youth, the pesto recipe could only be the evolution of a much older recipe, the agada (garlic), a garlic-based mortar sauce that was already used in the 13th century for the preservation of cooked food.

But we also like to remember the famous legend that tells of a convent that was located on the heights of Prà (in Genoa) named after San Basilio, in which a friar collected the aromatic herb (called basilium, in honor of San Basilio) which , combining it with a few ingredients brought by the faithful and pounding everything together, he obtained the first pesto which was then gradually perfected.

In the 1800s, pasta with pesto remained almost unchanged, although Persian influence began to be felt by adding a lot of garlic to basil (food necessary for long periods on board, considered by men of the sea almost a medicine).

The Pesto has reached a great popularity in the world thanks to the crews of the merchant or passenger ships that sailed from distant ports to the port of Genoa.

Although it is not an ancient recipe, pesto boasts a curious history, made of sea and legends.

Obviously for us it is an inevitable product and that should be present in all the kitchens of the world.

On this site we use technical cookies and profiling cookies to offer you a communication in line with your preferences. By clicking anywhere on the screen, scrolling or closing this banner, however, you consent to the use of all cookies.ContinuaPrivacy policy